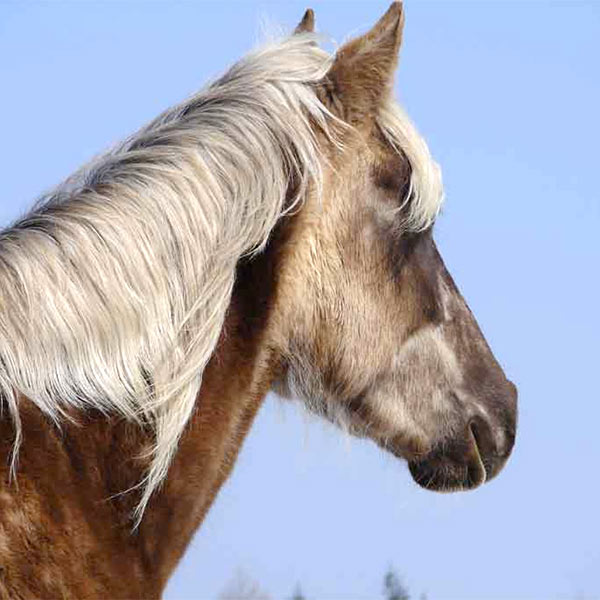 A Rocky Mountain mare, born 12/94, was being used as a pleasure horse. She developed inflammation with haziness (uveitis) in her left eye in April 2008 and again in May. There were no other symptoms.

History revealed that she had been a brood mare before her purchase in September 2005. She had a hoof abscess in March 2008. There had been many (12) vaccines between October 2005 and May 2007, at which time her guardian stopped vaccinating.

Ocular pain, eyelid swelling and mild scleral injection were noted in the left eye on April 17. The local vet made a diagnosis of uveitis and administered banamine (an anti-inflammatory) and a topical antibiotic eye ointment.  Symptoms recurred 5/25, again in the left eye. This time the vet administered an intravenous steroid and prescribed a topical antibiotic/steroid ointment.

When her guardian contacted me on June 9, mild conjunctivitis and squinting were still present in the left eye. She also had early cataract development in the right eye. Her guardian described this mare as a mild mannered horse: sensitive and responsive when ridden. She liked to be brushed and petted. Though she had been a good mother, she seemed unattached to the other horses on the property.

My assessment was that this is a manifestation of vaccinosis, an imbalance induced by over vaccinating. Drugs temporarily covered up the eye symptoms, but so far had not contributed to disease in any observable way. Remedy A was prescribed, based on the symptoms of uveitis, the cataract, the suspected role of vaccination, the history of a hoof abscess and the mildness of her nature. We discontinued the eye ointment.

A follow-up consult 1 month later revealed that the eye symptoms completely resolved in 1 week after the remedy. Her guardian also noted that the coat looked better. As of today, there have no new episodes.

Uveitis in horses tends to be recurrent and progressive: it can lead to blindness. In this case, the episodes were only 1 month apart and symptoms did not completely resolve after the first episode. Because the uveitis completely resolved and there has been no recurrence (though it was expected), my assessment is that the remedy was curative. Also, I suspect that she is still susceptible to vaccines and so have advised that vaccines be avoided if possible. Her guardian has decided to run antibody titers before deciding to revaccinate.