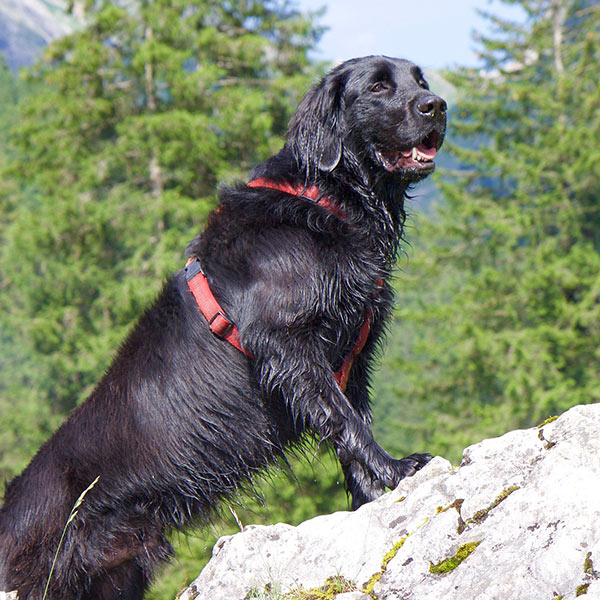 A flat-coated Retriever came to me in December 2007 because of chronic eye inflammation and recent onset itching.  He had been adopted as a stray from the Humane Society November 1, 2005, when he was approximately 9 months old.  Just before adoption, he was neutered and vaccinated.  One week later he developed a cough, green nasal discharge and fever.  In spite of antibiotic therapy, the symptoms worsened and he spent 2 days in the emergency hospital on IV fluids and antibiotics.  Distemper was suspected.  He was revaccinated in Dec. 2006.  Eye discharge began in July 2007, diagnosed as allergic keratoconjunctivitis.  Itching began in October.

At the time of the initial homeopathic interview there was eye inflammation in spite of the use of eye medication, lack of thirst and poor coat quality–thin, dull, sticky, clumping. He was eating a raw diet and had normal energy. The coat was sticky in the areas that he was licking so I assumed that the stickiness was due to viscid saliva, a result of not drinking. At this point I could not discern whether vaccines or drugs played the greater role in the disease.

Partially because of the yellow-green eye discharge and the lack of thirst, I began therapy with remedy A, to be given every 3 days.  By Jan. 24, 2008 the eye symptoms were better, he was drinking water (though not every day) and his coat was less sticky.

By Feb. 26 the eye inflammation was resolved. However, he was not drinking at all and the coat was dull, more sticky and tangled. It became apparent that remedy A was only partially curative.  It did not cover the totality of the case.  Remedy B (single dose 30c) was given on April 3 because of the suspicion of vaccinosis (disease caused by vaccines).

On May 7, his coat was shiny (first time ever), and no longer dry or clumped.  His guardian was especially impressed with the change in his behavior.  He was more responsive, attentive and affectionate. By June 10 there was very little itch and he was drinking on his own. His coat was a little sticky and there were a few mats.  A second dose of remedy B was given on June 13.

He became itchier June 21, while on a road trip. The coat was sticky though still shiny and he wasn’t drinking enough water. In August, on returning from vacation, we resumed remedy A because of the thirstlessness and because it follows remedy B.  In August, he developed a cough for 3 days, then had 1 episode of vomiting.

My interpretation was that he was revisiting and resolving the initial respiratory infection that had been treated with antibiotics (Nov. 2005). The drinking and itch improved but on September 15, he developed a new symptom: nausea at the smell of food. This new symptom was an indication that we were finished with remedy A. I dispensed remedy C (6c solution), to be given every 14 days.

On Nov. 18, after only 3 doses, the itch was resolved, and he was drinking enough to maintain adequate hydration. His coat was full and shiny and there was no stickiness. We gave 3 more doses and then stopped all therapy (Jan. 12, 2009). He has been asymptomatic since then.

Follow-up: On June 5, his guardian took him to the local vet to remove the head of a tick. A tick panel revealed positive titers for Borrelia and for Anaplasma so doxycycline had been prescribed. I explained that most cases are asymptomatic and that after homeopathic therapy his immune system should be strong enough to prevail against these microbes. No antibiotics were given and he remains symptom-free.