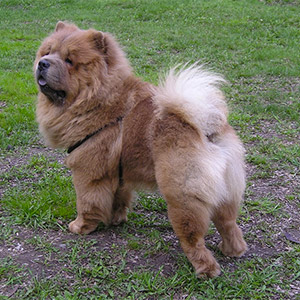 A 1.5 year old spayed female Chow who had always been healthy aside from an inverted lower eyelid (entropion) was seen at her local veterinary clinic for routine vaccinations, and was given a Rabies vaccine.  2 days later her current symptoms began.

She had become quite subdued; her right eye began discharging green matter; her energy and appetite were decreased. This malaise continued, and slowly developed into urgency to urinate, with the most peculiar characteristic that she refused to urinate except inside the lake (which thankfully wasn’t too far from the house).  She had to wade into the lake to void the urine; she would not urinate on land.  In addition, she was separating herself from the rest of the family, wouldn’t play with the other dog of the household, still had discharge from the right eye, had stools that were softer than normal and had vomited water a few times in the past couple of weeks.

Physical exam and urine analysis revealed nothing additional and ruled out a urinary tract infection.  A homeopathic remedy was selected based on the symptoms described above, and given in a single dose.

A report, obtained 7 days later, revealed that she had improved considerably.  She was no longer hiding in dark, empty rooms or obsessed with the lake.  But she seemed over-reactive, especially toward moving things, like a ball rolling past her, or children running.  She reacted by barking loudly, or startling or shying away.

The resolution of the previous symptoms, with the development of this new symptom, pointed to a different homeopathic remedy, which was then administered, again in a single dose.  A follow up report was obtained 10 days later (verbatim from owner’s e-mail):

“She continues to do better each day. The only thing that concerns me is weeping from her right eye. It’s not daily now but still every 2-3 days it will weep all day and she will paw at it if I don’t keep it wiped. The hyper-reactivity has resolved and she is mellow as ever now.”

It seemed that the acute phase of this imbalance was drawing to a close. The only remaining observable dysfunction was a historic complaint she had her whole life, which had been corrected surgically.  Another update a month later showed that all of her behavioral abnormalities had resolved, and her right eye had a very slight, intermittent watery discharge.  The owner considered this ‘normal’ for her.

She is seen yearly for her wellness exams and continues to do very well.  It has been 18 months from initial presentation at the time this article is written.